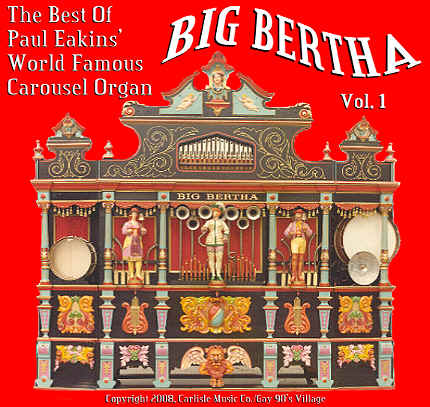 The "Big Bertha" Carousel Fair Organ captures the adulation of audiences everywhere she was exhibited. One of three organs

that were on a beautiful old  Looff Carousel in Ramona Park, Grand Rapids, Michigan, from 1910 to 1955. She was put in storage

until moved to Gulf Shores, Alabama.  Big Bertha is a Limonaire Organ having been made in France in the late 1800's. She was

purchased by Paul Eakins in 1963, and over 2500  man-hours were spent in completely redoing the organ from August 1963 to

June 1966. During 1978, the fifth change in the method of programming was made for Big Bertha. Big Bertha was showcased a

the  Gay 90's Village in Sikeston, Missouri,  and the Gay 90's Melody Museum in St. Louis, Missouri. The organ also traveled the

country to various State Fairs and Expositions up until  Paul Eakins retired in 1978. He then sold Big Bertha and most of his

collection to Disney World in Orlando, Florida.  First, she was a Barrel Organ, playing from a 90 key pinned cylinder. Second,

bells. The very ingenious snare  drum action stems back to the great Leonardo Da Vinci who designed this type of arrangement.

The triangle perforations now activate the two comely bell-ringers. The Director, Big Bertha, is in time with the bass drum. The

piccolos now play intermittently with the trumpets. When the piccolos are playing, the bell-ringers play in unison with the bass

drum. The director holds the baton with her right hand, and when she turns her head to the left, directs in time with the bass

drum; when she looks straight ahead  again, she raises her left hand.  She is flanked on either side by a bell-ringer. The three

figures  are beautifully proportioned and resemble real people. Hand carved, the embellishments are colorful and elaborate.

adorn the grille. At the lower center of the facade is a very savage-looking gargoyle.  These are all fine examples of the highly

specialized art of wood-carving. Big Bertha is truly a work of art and her music is very exhilarating, bringing back the nostalgia of

bygone days. Sit back and enjoy Big Bertha at her best.

8. On The Beautiful Danube

10. Loves Dream After The Ball

12. One Thousand and One Nights

19. Battle Hymn of the Republic

Back to Compact Discs